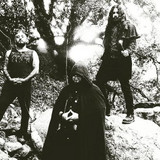 War Boy is So Cal’s latest Heavy Death Rock outfit officially forming in early 2016 after guitarist and vocalist, Matt Rodriguez, began writing and recording their first 2 demo EPs. With drummer (Ruben Hoyos) and bassist (Oscar Bibriesca) joining soon after, the band started adopting a darker tone leaving behind a lot of their raw punk style behind in favor of a tighter and more refined heavy sound. This change of tone became even clearer in 2019’s Feeble Flesh The year 2020 is an important year with the release of their debut album Nightmares and sights set on the production of an additional release. War Boy has gained traction and the attention of music fans throughout United States and continues to play throughout the country.