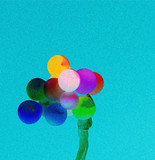 Treasure wears his emotions on his sleeve. He transverses his musical world with this heightened sense of vulnerability, creating a space where he and the listener can rest at ease with no fear of judgment. His laidback production and genre-merging tendencies provide a nostalgia-based backdrop for his lush soulful harmonies.   His latest EP “PLEBEIAN” is an expression of the colour in his mind, with trippy, calming elements dripping in style and originality. Exploring mellow sounds, feelings, and moments of candid expression., Treasure confides, “Self-produced over the last two years, these are tracks that haven't found a place on any pending projects, but I feel like they deserved to see the light of day.”   Raw in his approach, his self-produced and bedroom-recorded releases have quickly found themselves featured on many notable blogs and multiple stations on the BBC Radio circuit. He has also received extensive support from the likes of COLORS, Apple Music, and Starbucks.