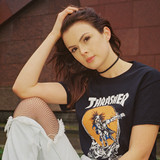 At only 22 years old, Kiwi musician Maya Payne is a self-made success story who's taking her unique sound to the world. Through her own music label which she established, Rolley Records, she released her debut EP The Lucky Ones, which peaked at number 6 on the New Zealand album charts. The album's lead single 'If Only' launched her career big time with its electro-pop undertones, and was even the talk of Tinseltown, with actress Chloë Grace Moretz giving her a shout out on Twitter. With crisp production and arena-ready finesse, it comes as no surprise that she has already supported the likes of Charli XCX, with her music on the radar of several high-profile producers based in LA and Berlin. As a result of a random chance encounter, Payne has even collaborated with one of Justin Bieber's producers. A firm favourite on the likes of Spotify and Soundcloud, she has garnered a global fan-base, with talks of overseas tours on the cards.   Website: mayapayne.com Facebook: mayapaynemusic Instagram: @yeaimapayne Twitter: mayapaynemusic