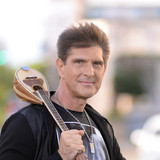 New EP out NOW! Six new songs, including a downtempo remake of his own hit “Byzantine Meditation,” and a new recording of “Procedamus In Pace,” the Gregorian chant made famous by the group Enigma in their track “Sadeness.” Plus 2 tracks with Yaksta, the hottest upcoming artist in Jamaica. Antaeus is an award-winning producer/artist with a Bachelor of Science Degree in Music Industry. He is a voting member of the Recording Academy, the governing party for the GRAMMY awards. Antaeus achieved worldwide success with his three personal albums: Byzantine Meditation, World Prayer and Zero4. His music has been described as a “chill-out soundscape fusing voices, traditional instruments and electronica.”