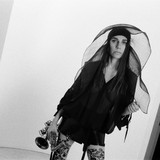 During the alternative rock explosion, several female singer/songwriters rose to prominence, but few are as distinctive or as widely praised as Polly Jean Harvey. Over the course of her career, Harvey established herself as one of the most individual and influential songwriters of her era, exploring themes of sex, religion, and political issues with unnerving honesty, dark humor, and a twisted theatricality. At the outset, she led the trio PJ Harvey, which delivered her stark songs with bruisingly powerful, punkish abandon, as on 1993's Rid of Me. Over time, however, Harvey's music became more nuanced and eclectic. Her 2001 album Stories from the City, Stories from the Sea featured a heady mix of trip-hop, guitar rock, and troubadourism, earning her the prestigious Mercury Prize. As the years passed, Harvey continually shifted gears, from the ghostly Victoriana of 2007's White Chalk to the moody social commentary of 2011's Let England Shake (which earned her a second Mercury Prize, making her the only artist to have done so) and 2016's The Hope Six Demolition Project. Harvey grew up on a sheep farm in Yeovil, England, where she was raised by her quarryman father and her artist mother. As a child, she learned how to play guitar and saxophone, and when she was a teenager, she played in a variety of bands. In 1988, Harvey joined Automatic Dlamini, the Bristol-based project of John Parish. She played saxophone, guitar, and sang backing vocals as they toured throughout Europe in support of their debut album, The D Is for Drum. Harvey also appeared on the band's unreleased second album, Here Catch Shouted His Father. Though she left the band early 1991 to start her own project, she continued to collaborate with Parish throughout her career. She formed the trio PJ Harvey with her former Automatic Dlamini bandmates drummer Rob Ellis and bassist Ian Oliver, who soon returned to Automatic Dlamini and was replaced by Steve Vaughan. After making their live debut that April, in June the band moved to London, where they recorded demos that they sent to labels that included the experimental indie imprint Too Pure. In October 1991, the label released PJ Harvey's debut single, "Dress." It became an indie rock sensation, as did its follow-up, "Sheela-Na-Gig," with both singles receiving lavish praise in the U.K. music press. In March 1992, Too Pure issued PJ Harvey's debut album, Dry. Recorded

at Yeovil's Icehouse Studios for under $5,000, the album earned international acclaim and reached number 11 on the U.K. Albums Chart. The trio followed it with an extensive tour, culminating with an appearance at that summer's Reading Festival. Shortly after the tour, Harvey moved to London, where she nearly suffered a nervous breakdown due to the extraordinary pressure and expectation surrounding her second album. Later in 1992, PJ Harvey signed to Island Records, and that December the band worked with Steve Albini at Cannon Falls, Minnesota's Pachyderm Recording Studio to make their second album. Albini imposed his trademark noisy, guitar-heavy sound on the record, which mirrored its harder-edged themes. Arriving in May 1993, Rid of Me was a major critical success and expanded Harvey's cult greatly: it hit number three on the U.K. Albums Chart and was certified silver; in the U.S., it made the Top 10 of the Billboard Heatseekers Chart and peaked on the Billboard 200 at 158. She supported the album with a tour featuring herself in a fake leopard-skin coat and a feather boa, signaling her developing interest in theatricality. After finishing the Rid of Me tour in August 1993, the trio disbanded. Harvey's first release as a solo artist was October's 4-Track Demos, a collection of her original versions of the songs on Rid of Me. Like that album, 4-Track Demos was a critical success that also made a commercial impression; it reached number 19 on the U.K. Albums Chart and number 10 on the Billboard Heatseekers Chart. To make her third album, she wrote songs in the Yeovil home she bought with the royalties from her first two albums and recorded with producer Flood, bassist Mick Harvey, guitarist Joe Gore, and former bandmate Parish. Harvey developed a richer, bluesier sound with the expanded band, and To Bring You My Love, was hailed as a masterpiece by many critics upon its February 1995 release. Thanks to considerable press attention, as well as strong support from MTV and modern rock radio for the single "Down by the Water" (which reached number two on Billboard's Modern Rock chart), To Bring You My Love was a moderate hit. It entered the Billboard 200 at number 40, and in the U.K. it debuted at number 12, ultimately earning silver certification. Harvey spent all of 1995 touring the album. The following year, she contributed vocals to Nick Cave's Murder Ballads album and collaborated with Parish on Dance Hall at Louse Point. In 1997, Harvey began work on her fourth album, reuniting with Ellis and Flood on a set of introspective songs that that incorporated electronics into her music. The results were September 1998's Is This Desire?, which was nominated for a Grammy Award for Best Alternative Music Performance. The album peaked at 54 on the Billboard 200 and peaked at 17 on the U.K. Albums Chart, and the