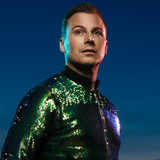 Magnus Carlsson is a Swedish pop singer who embarked on a chart-topping solo career after the turn of the century. He has previously been lead singer of the popular band Barbados and was also a member of the chart-topping Euro-dance group Alcazar for three years. Born on June 24, 1974, in Borås, Sweden, he studied music at Gothenburg University and joined the band Barbados in 1992. Barbados made their eponymous album debut in 1994 and topped the charts with the song "Hold Me" but didn't break through to mainstream success until 2000 when their song "Se Mig" won second place in that year's Melodifestivalen. Barbados subsequently won second place in the 2001 Melodifestivalen with their song "Allt Som Jag Ser" and topped the charts with their next two albums, Kom Hem (2000) and Världen Utanför (2002). At the end of 2002 Carlsson left Barbados and joined the Euro-dance group Alcazar. The resulting album, Alcazarized (2003), was a commercial blockbuster, reaching top of the charts and spawning hits like "Not a Sinner Nor a Saint," "This Is the World We Live In," "Start the Fire" to mention a few. Carlsson has since 2005 been a solo artist with numerous entries in Melodifestivalen with chart-topping hits like "Lev Livet", "Live Forever" and "Möt Mig i Gamla Stan" and has been awarded several Grammis,- and Golden Clef Awards alongside around 40 Gold,-and Platinum records. Besides frequent touring in Sweden and Europe, Magnus has also been hosting TV-shows and played in musicals.