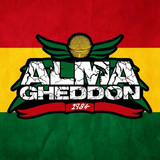 Andrea Bottino aka Almagheddon was born in Vercelli (Italy) in 1984. He has increased his musical talent studying several subsaharan percussions while he was attending the University of Torino. In the same years he starts to discover reggae music and to gain confidence with the stage discovering a great potentiality in his timbre. His first shows took place feat Neekoshy in several club of Torino, Piemonte, Lombardia, Liguria, Lazio. In 2012 he has collaborated with Dub Gun Records releasing the track “Some a dem” contained in “Just a riddim" mixtape and he has produced a videoclip for the first time; in the same year he continues the collaboration with Dub Gun Records recording his first mixtape “Dem a control” contains riddim produced by Augusta Massive, One beat Production, Plei produzioni. In 2014 he has participated to Emergenza festival feat Neekoshy backed by Way outta Babylon performing at the Audiodrome club of Moncalieri

arriving till the final show has taken place at the Hiroshima Mon Amour of Torino. On April 4th 2016 he has released a featuring with Smoothies produced by Guerrilla Crew contained in their Ep L(ass)d. On 28/04/2017 he has released his new single and videoclip “Bun Dem” on the bubblin riddim produced by Break Koast Records. On 29/09/2017