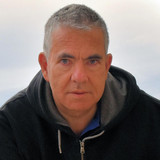 Nick performed in a string of bands in his teens and twenties, playing all the way from Ascot to Hull. After a lengthy hiatus, in 2012 he retrieved his guitar from the loft and has been playing solo around Hampshire and Dorset ever since. Nick made a 5 track EP Alive in sunny Southampton with five of his most popular live songs in July 2019. He writes love songs, sing-alongs and songs about cheese. There are at least two people in the world called Nick Haynes. The first is a songwriter and inventor from Southampton, England, the second plays Australian rules football for the Greater Western Sydney Giants. “Nick the song” (as he might be called in Wales) is 6’6” tall so is ironically 2 inches taller than the Giants player. If you want to find “Nick the song” on the net then you need to type in “NickHaynesMusic” or you will get lots of pictures of an Australian man in a rather cool looking shirt.