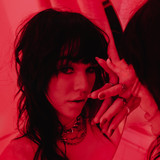 As a graduate of the Arizona School for the Arts, UPSAHL ignited a groundswell of fan adoration and tastemaker praise by way of numerous indie alternative gems. "Can You Hear Me Now" achieved a palpable viral buzz followed by the widely praised single "Drugs," which has been used in nearly 2,000,000 TikTok videos, reaching #6 on the TikTok Viral Chart and #1 Sound on the TikTok Trends Chart. "Drugs" led to a momentous year for the "up-and-coming indie-pop queen" - according to Alt Press. UPSAHL has taken the stage at Lollapalooza and supported acts such as PVRIS, Joywave, BROODS, and Young the Giant. YouTube claimed UPSAHL as their 'Artist on the Rise,’ Nylon proclaimed, "She's on her rock star ish," and NME declared she "has a knack for fusing fizzy hooks with her drawling delivery of pithy lyrics. The result - her vibrant alt-pop bops.” Her EP Young Life Crisis was crowned by Billboard as one of the Top 25 Pop Albums of the Year. UPSAHL co-wrote Dua Lipa's "Good in Bed," which appeared on her GRAMMY Award winning album, Future Nostalgia, as well as, Anne-Marie’s “Kiss My (Uh Oh),” which was an instant Top 10 hit in the UK. She also co-wrote Madison Beer’s single "BOYSHIT," and Mike Shinoda's "Happy Endings," which features her and iann dior and hit #9 on the US Alt Radio Chart. UPSAHL's new singles “Douchebag,” “Melatonin,” and "Time of my Life” are out now. They mark the first songs off of her full-length debut album due out in October 2021.