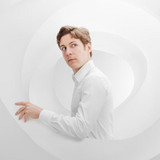 Deeply fascinated and inspired by the connections between different forms of artistic expression, the Montreal based composer Maxime Goulet works within various realms of musical creation ranging from symphonic music to video games. A symphony evoking different flavoured chocolates, a piano concerto as a soundtrack for a chess match, a fishing story mimed by a costumed clarinetist, a cabaret opera based on a comic book, a crowd game for orchestra with a giant beach ball, an 8-bit concerto, symphonic aerobics… With his communicative musical language and the originality of his concepts, the Montreal based composer Maxime Goulet connects with audiences from all kinds of backgrounds and experiences, from youth audiences to savvy music aficionados. His music is written in a contemporary tonal style and has been described as “skillful, immediately pleasant and very cinematographic”, “melodic and narrative”, “a mix of simplicity, of modernity and of humour”, and “an immediate connection with the audience”. His album Symphonic Chocolates has been described as “an off-the-wall idea that makes classical music more festive”. Driven by the desire to make music more interactive, the Montreal based composer Maxime Goulet scored more than 30 video games such as Warhammer 40,000: Eternal Crusade, Roller Coaster Tycoon World, The Amazing Spider-Man, Dungeon Hunter, Shrek Forever After, Brothers in Arms 3: Sons of War, Iron Man 2, Order and Chaos and Backstab.