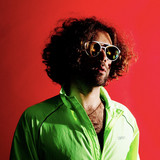 Eclectic Brooklyn-based multi-instrumentalist, singer/songwriter, arranger, composer, and producer Benjamin Lazar Davis has made his name as a valued collaborator as well as a gifted solo artist. With a talent for indie rock, pop, and folk sounds, Davis has created trippy but engaging sounds with Cuddle Magic and Okkervil River, and he's contributed to recordings by Kimbra, Lady Lamb, and Anna & Elizabeth. Davis is also passionate about African music, and has used his knowledge in all its forms to record projects in tandem with Joan as Police Woman and Bridget Kearney. With his solo debut, 2018's Nothing Matters, Davis assembled his various influences into a personal statement recorded in the home where he grew up. Benjamin Lazar Davis was born in 1986 in New York, New York. His father, Peter Davis, was a professional musician whose resume included stints with Jay Ungar & Molly Mason and a latter-day version of the Mamas and the Papas. He also spent several years studying music in Africa, a passion he would pass along to his son. Benjamin would decide to launch a musical career of his own, and he was studying at the New England Conservatory of Music when he co-founded the group Cuddle Magic in 2006. Performing a unique brand of experimental folk-pop, Cuddle Magic released their self-titled debut album in 2008. Davis would cut four more albums with the group, including a collaborative album with Phyllis Chen. In 2009, Davis took a break from Cuddle Magic and traveled to West Africa to study music; he fell in love with percussion-based music and the Ghanaian musical style known as Bawa. In 2014, Davis returned to Africa with Bridget Kearney, a fellow member of Cuddle Magic who also played bass in Lake Street Dive, and together they recorded an EP steeped in the sounds of Ghana, BAWA, that was released in 2015. In 2016, Davis teamed with Joan as Police Woman's Joan Wassner to cut an album informed by African music, Let It Be You. That same year, he would join the indie folk group Okkervil River, appearing on their albums Away (2016) and In the Rainbow Rain (2018). Taking some time off from his many projects, Davis decided to spend some time with his family and ended up recording an album in his childhood bedroom, a low-key psychedelic effort called Nothing Matters; released in 2018, it was his first proper solo album. In 2019, Davis and Bridget Kearney reunited to record another album in Africa, 2020's Still Flying. ~ Mark Deming, Rovi