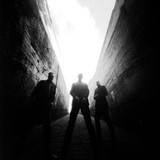 Covenant. It’s a name that implies extraordinary commitment, a certain grandiosity, and a bond stronger than blood. As a name, Covenant—with its biblical overtones—was perhaps a bit ambitious for an upstart band of teenagers from southern Sweden armed with rudimentary electronics, but it ended up being extraordinarily fitting. Whether or not life subsequently imitated art or art subsequently imitated life is debatable, either way the band’s moniker ended up perfectly summing up the vision, grandeur, and brotherhood that is the band itself. "We live in dark, confusing times and Covenant wrote an album about how that makes us feel. In a world that has stopped making sense, we need to learn how to see in the dark and "The Blinding Dark" is a triumphant embrace of the strength and resilience of the soul. It's the dystopian, unforgiving music of the reflective shadows we all carry within us, but often lack the courage to take a good look at. It's implosive instead of explosive, fuelled by cold fury rather than a roaring fire, as beautiful as a collapsed star." (Joakim Montelius) "The Blinding Dark", Covenants 9th studio album released November 4 2016, steers like a probing Nautilus through black waters, straight towards the future, never looking back. Welcome to the void.