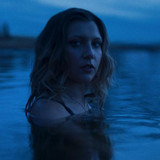 Since first cutting her teeth in the Texas music scene as a teenager, her influences have been plucked from an array of genres, from country-folk icons like Townes Van Zandt and Guy Clark to edgy rock and indie acts like The War on Drugs and Metric. Each of these acts share a common thread of expert storytelling and lyricism that is audibly woven through Van Darien's own output. A native of Weatherford, Texas, Van Darien grew up with both the ethereal beauty and seemingly inescapable isolation that are the age-old duality of rural country living. Her father ran a machine shop on her family's land, which was scattered with rusted out cars and pieces of scrap metal -- an industrial landscape where she first picked up a guitar, began writing poems, and started to develop her own sound. From there, she forged relationships with other like-minded artists in the Lone Star State and evolved her songwriting processes. She released her first EP Silent Sparrow in 2014, showcasing her earthy vocals and a gritty, organic, and soulful blend of Americana, alt-country, folk, and rock that were grown from the ground up. Produced by Steven Cooper and JD Tiner at East Nashville's Glass Onion Studio, Levee mixes earnest folk songwriting with experimental pop elements to create a dreamy, engaging sound that's all her own. Darien’s full-length debut features contributions from Brandy Zdan, Owen Beverly (Indianola), Thayer Serrano, Mando Saenz, Joey Green, and Maren Morris.