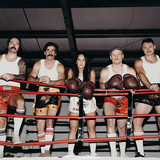 Hailing from a small town off the coast of Northern Ireland, Rend Collective (Gareth Gilkeson, Chris Llewellyn, Ali Gilkeson, Patrick Thompson and Stephen Mitchell) wants to be known as a celebration band. The group’s authentic and energetic style of worship has attracted an international audience, with songs like Build Your Kingdom Here, My Lighthouse, and Counting Every Blessing. Their most recent albums have hit the highest non-Christian charting any worship album has ever achieved in the U.K.In 2018 Rend Collective sold out their hometown show at the SSE Arena in Belfast making it the largest attended Christian concert in the country. With good reason too, Rend Collective continually draw in fans across the world with their electric performances and a good dose of Northern Irish charm. From playing sold out gigs in Canada, mainland Europe, Scandinavia, Brazil, Hong Kong and the U.S. , to the fact that “Boldly I Approach” has become the most popular hymn in the German church: the band are undeniably a global force. Despite all this, the band seem to be doing it differently than most other artists before them, living and working—singing and sharing the laundry duties—as a tight-knit family, even touring with their young children most of the time. The word “Collective” is not just in their name, but in their foundations forming the heart and strength of their ministry. Their latest single, Your Name Is Power, is now available everywhere.