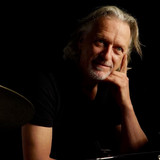 Drummer Lucas van Merwijk has been at the forefront of the European Jazz, Latin and percussion scene since the early eighties. He was elected 'Best Jazz Drummer' and 'Best Fusion Drummer' in the Benelux countries by the readers of dutch drum magazine De Slagwerkkrant many years running between 1993 and 2015. After an intensive study of Afro-Cuban drums with drummer Oscarito Valdes (Irakere) in Cuba in 1985 Lucas van Merwijk has been active with a variety of projects. At the moment Lucas is the initiator and leader of a number of ensembles: the world-percussion group Drums United, Van Merwijks Music Machine (with a changing line-up every year), Drumix! with master percussionist Aly N'Diaye Rose, and the 20 piece salsa and Latin Jazz ensemble The Cubop City Big Band. All of these experiences have made him develop his own special style, a mix of Cuban, Brazilian and North American rhythms, characterized by powerful percussion and splendid technical skills. Van Merwijk has been staff teacher for drums and percussion at both the World Music department of the Rotterdam Codarts conservatory as well as the Jazz department of the Amsterdam Conservatory since 1986. In 2010 Lucas wins the Global Act Award 2010, for remaining continuously successful as a leading international Artist in world music, over a long period of time. In 2013 he publishes his drum book World Beat, world rhythms for drum set followed by his release Advanced Coordination Studies in 2017.