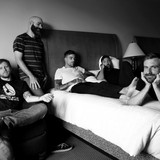 Philadelphia's Circa Survive was formed by former Saosin vocalist Anthony Green with guitarist Colin Frangicetto -- both of them veterans of the local emo and hardcore scenes looking to indulge in the rule-breaking freedom of the neo-progressive movement of the mid-2000s. After Green and Frangicetto discovered like-minded bandmates in second guitarist Brendan Ekstrom, bassist Nick Beard, and drummer Steve Clifford, Circa Survive recorded an album, Juturna (named after a Roman goddess), for Equal Vision Records in 2005. Lots of touring followed, including Warped Tour dates, and the album steadily sold an impressive 100,000 copies. A spot at the 2007 Coachella Festival paved the way for the late May release of Circa Survive's follow-up, On Letting Go, which cracked the Top 40 of the Billboard Top 200. The band eventually left Equal Vision to sign with Atlantic, and in 2010 released its third album, Blue Sky Noise, which eschewed many of the hardcore elements of records past in favor of a more melodic, indie rock approach. (No surprise that the album charted quite high, almost making the Top Ten.) The band's fourth long-player, the self-released Violent Waves, arrived in 2012 and debuted at the number 15 slot on the album charts. After its release, Circa Survive signed to Sumerian, which reissued a deluxe edition of Violent Waves and then released the band's fifth album, Descensus, in November 2014 via Sumerian Records. In July 2017, the band released the single "Lustration" in anticipation of the release of their Hopeless Records-issued sixth studio long-player, The Amulet, which arrived later that September. ~ Eduardo Rivadavia, Rovi