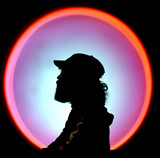 on Sunday Best Recordings. The LP is the follow up to his critically acclaimed debut We Share a Similar Joy, which saw JW firmly mark himself out as New York’s next lo-fi legend gaining mass support from BBC 6Music, Apple Music, Spotify, DIY, The Line of Best Fit, The Independent, HMV, Wonderland, and many others. A collection of 11 irresistible tracks, WANDERKID is a concept album which explores themes of escapism and the urge to break free as JW elaborates; “WANDERKID is an album about escape. It’s supposed to be a gut punch of a record about an anti-hero named WANDERKID who wants to get OUT: out of his living situation, out of his head, out of his life. This album is like looking out the car window with an urgent desire to be on the other side. It was finished during the most recent global pandemic, so hopefully folks find it relatable.”