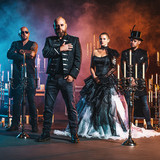 Founded in the year 2000, MONO INC. never rested in creating their own specific sound from scratch, up to the point they reached the very top spot among the German Dark-Rock bands. They released albums regularly, never stopped touring, up until the point they joined the band “Unheilig” on their anniversary stadium-tour in 2010. That marked MONO INC.’s start on the big stages of Germany and their arrival in prominence. By constantly convincing new fans with their music and presence, more and more people started streaming towards MONO INC.’s concerts and their success-story has never stopped since then. On the album “Together Till The End” MONO INC. published a great collaboration with Tilo Wolff (Lacrimosa), Chris Harms (Lord Of The Lost) and Joachim Witt. The song „Children Of The Dark“ became the anthem of the gothic-scene. The growth in popularity kept on rising and now, in 2020, they released their most successful album in the band’s history – “The Book Of Fire”. MONO INC. previously had been able to place nine albums in the Official German Charts; six of them even reached Top 10. With “The Book Of Fire” they landed the #1 spot for the first time.