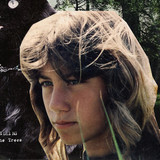 Born in Caldas da Rainha, Portugal, Nadia Schilling grew up with the alternative rock movement that popularized the city in the 1990s. She studied Landscape Architecture and attended the Conservatory of Music where she studied guitar and vocals. In 2012, she joined the band Loopooloo and released EP (2013). She was also part of a jazz quintet with whom she recorded "Blue EP" (2016). In 2015 she released her Covers EP and after the single Bite The Bullet (2016). The songs from “Above the Trees”, her first solo album,

were all composed on an old acoustic guitar inherited from her grandfather after the difficult time that followed her mother’s death. The sound of these songs is based on folk elements, but also of rock and jazz. Her influences come from a different range of artists such as Beck, Nico, Elliott Smith, Cat Power, Smog, Jon Brion, Fiona Apple, Nick Cave, Portishead, Antônio Carlos Jobim, Chet Baker, Karen Dalton and Blossom Dearie. The new album features some great musicians such as Filipe Melo (piano/keyboards), Joao Hasselberg (bass/double bass), Bruno Pedroso (drums), and special guests like the Brazilian singer Marina Vello (Bonde do Role, Marina Gasolina, Madrid), and the guitarists João Firmino and Mario Delgado, among others.