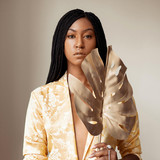 Dominique Fils-Aimé [FEES-em-AY] is a JUNO Award winning singer-songwriter from Montreal. Her ambitious album trilogy conceptualizes the history of African American music. Dominique reflects on the social realities that influenced the genres of blues, jazz and soul. Through this process she is able to gain a deeper appreciation of the emotion behind the music and channel that spirit into her own work.

Dominique received her first big break when her sophomore album, “Stay Tuned!” received a write up on Revelation Jazz for Radio Canada. The same album was shortlisted for the Polaris Music Prize and was featured among the 19 best Canadian albums of 2019 by CBC. In the first few weeks of releasing her most recent work, “Three Little Words” it claimed the #1 spot for best selling album in Quebec and #2 in Canada, with over 300 media mentions internationally and a Polaris Music Prize shortlist nomination. Dominique has toured the United States and Canada’s Jazz Festivals circuit, with an upcoming European tour this Fall 2021. Publicist US: david@girlieaction.comPublicist Canada: kim@takeaimmedia.com Publicist Quebec: simon@sixmedia.ca Management: kevin@ensoulrecords.com Booking North America: catherine@lamaisonfauve.com Booking Europe: info@anteprimaproductions.com