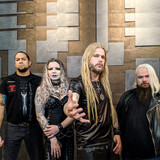 Brazilian Blackened Death Metal band that has received excellent reviews and compliments for their unique style. They have played hundreds of concerts in Brazil, sharing the stage with bands such as Dark Funeral, Krisiun, Gama Bomb, and on their first european tour they played alongside Besatt, Fleshless among others, getting excellent reactions from the european crowds. Originally formed by creative composer and multi-instrumentalist Maxx Guterres, vocalist and guitarist, and Juliana Novo, one of the most brutal female drummers in Metal scene, two times finalist on HitLike A Girl worldwide contest, the band is completed by the bassist Beto Factus and the lead guitarist Rafael Orsi. More info at www.crucifixionbr.com.