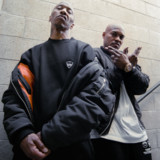 A combative and in-the-red style of hardcore rap brought Onyx unlikely crossover success. The Queens-based group formed in 1988 and two years later made their recorded debut on the Profile label. "Ah, and We Do It Like This" presented permanent members Fredro Starr and Sticky Fingaz, along with Suavé and Big DS, as an eager if comparatively reserved crew. The group subsequently found an admirer in Run-D.M.C.'s Jam Master Jay, who signed the group to his Chaos/Columbia-affiliated JMJ label and co-produced their first album, Bacdafucup (1993). The set was led by the highly energized and anthemic "Slam," one of the year's biggest rap hits and a number four pop hit. Shortly after their commercial impact was made, Onyx courted the metal crowd with a pair of Biohazard collaborations: the "Bionyx" remix of "Slam," and the title track to the motion picture Judgment Night. Certified platinum by the RIAA, Bacdafucup also went on to win Best Rap Album at the 1994 Soul Train Music Awards. Although All We Got Iz Us (1995) and Shut 'Em Down (1998) both debuted in the Top Ten of Billboard's Top R&B/Hip-Hop Albums chart, Onyx left the major-label system after the latter and went independent with Bacdafucup, Pt. 2 (2002) and Triggernometry (2003). By that point, Fredro Starr and Sticky Fingaz had embarked on solo careers and also established themselves as in-demand actors, seen in films and television series such as Clockers, Dead Presidents, New York Undercover, Moesha, and The Wire. The duo eventually resumed studio work the following decade with #WAKEDAFUCUP and #TURNDAFUCUP (both 2014), Shotgunz in Hell (released in 2017, a collaboration with the Netherlands' Dope D.O.D.), and Black Rock (2018). ~ Andy Kellman, Rovi