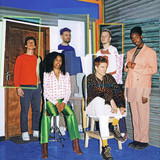 Franc Moody’s sound is contemporary funk, awash with electronic inspiration, human touches, and throbbing grooves. Like Daft Punk and Jamiroquai before them, they draw from the sounds, styles and techniques of funk, disco and soul while simultaneously threading in electronic influences of the here and now. The band's latest offering, the House of FM EP is a lockdown project which sounds, ironically, exactly like the world opening back up again. With elements of disco, house, soul and funk - amalgamated into pristine modern pop - the London band remains a complete one-off whilst pushing their sound (ahead of work on album 2) into new areas… Needless to say, a life lived indoors has arguably never been one for Franc Moody. A band who came up via the tight-knit warehouse scene of London, they have earned their reputation as one of our hottest home-grown live prospects, with a run of raucous sold-out shows worldwide culminating in the release of Dream in Colour. As well as working on ‘House of FM’ since then, the band’s recent, endlessly positive pandemic activity include a 'Live In The Lift' live-stream (which raised money for Music Venues Trust) and the launch of a wholly sustainable merch line. With songs about escape, togetherness, community, and the tension between online and offline life now manifesting itself in an unprecedented manner, Franc Moody is a reminder of better days (and late nights) ahead. On ‘House Of FM’, it’s finally time to leave the house.