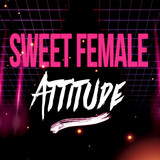 Sweet Female Attitude is an electronic music act from Manchester UK, best known for their platinum selling record ‘Flowers’ which was first released in April 2000.

Twenty years on with over a hundred releases in multiple genres, it is difficult to pinpoint SFA to a particular style, but chances are that you will have danced to one of their tracks, bootlegs or mashups if you have been in a nightclub or festival in the UK over the past ten years. SFA remain one of the busiest touring artists in the UK, fronted by original member Leanne Brown and her DJ Producer husband Nekxtman,