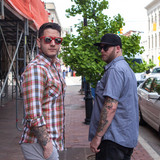 In late 2015, after sending out over 400 copies of his unmastered debut album as a solo artist—Dealing With People—and receiving only ten negative reviews, multi-instrumentalist, singer-songwriter, and record producer John Kay discovered his “genres-be-damned” approach to creating music was something audiences everywhere were craving. Based on the overwhelming positive feedback, Kay partnered with multi-instrumentalist and songwriter Steve Lupinski to form JK&WTS (John Kay & Who’s To Say)—in March 2018, they debuted to a sold-out crowd of 125 as the sole performer on a Wednesday night. Since their debut, JK&WTS has released many new songs, each one different from the last. While Kay and Lupinski tend to focus on socially-charged topics—guns, climate change, addiction, police brutality, COVID-19, etc.—their overall message is intended to positively impact others and inspire a more intentional way of day-to-day living (and a few holiday songs don’t hurt, either). JK&WTS has impressed audiences with their live shows in pockets across the midwest and northeast United States, and was featured on national television multiple times thanks to The Dan Patrick Show. Recently, Kay and Lupinski launched their ad-hoc podcast Who Let You In Here? to help their audience grow. After spending most of 2020 writing and producing, JK&WTS is scheduling several new releases to close out the year and head into 2021. Bottom line: Detroit’s best-kept secret won’t be hidden for much longer.