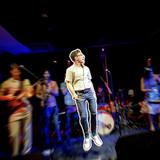 Boston’s R&B ensemble Miss Fairchild is joyfully committed to The Show; spectacle, musicianship, awe and entertainment. Performing in the grand tradition of the Motown/Stax innovators of the 60’s, and the glittery Pop-Funk icons of each succeeding decade, MF exists amongst a new tier of R&B showmanship. Channeling both the urban ferocity of The Dap Kings as well as the slick live acts of Justin Timberlake and Bruno Mars, they tilt their fedoras to the past, while dancing in tandem with the contemporary.   At the heart of any great show band is a charismatic frontman. Travis Richard (or "Daddy Wrall") leads Miss Fairchild with soulful voice and energetic step; a tribute to his tireless heroes, Prince and Michael Jackson. Growing up as the preacher's son in a small town, Richard discovered a yearning to command the stage. Now playing sold-out shows backed by an incredible rhythm section and smooth funk sax, Richard and his band embody a fully-realized childhood dream, howling and wailing their songs in a voice that's familiar, yet entirely their own.