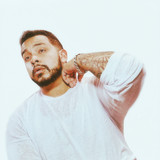 Matt Brown, known professionally as iBleazy, is an American singer, songwriter, dancer, and creative entrepreneur. In the summer of 2009, iBleazy began his search for musical acknowledgment by auditioning for season nine of the hit show American Idol. In March of 2013, he performed under C. Sheily Entertainment at the Black Sheep in Colorado Springs for “303 Day” (a day dedicated to Colorado based band 3OH!3) for the opportunity to perform during their college tour. In 2016, iBleazy relocated to Central California. While in California, he had the opportunity to work with many well known local photographers and fellow music artists, eventually performing two original songs and a cover for the Cambodian New Year in Long Beach California. In the Spring of 2018 iBleazy partnered with Southern California Recording studio owner and Engineer Nick DiCarlo at DiCarlo Productions. He