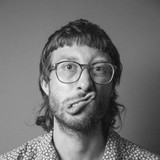 Instinctive improvisation. Funky blues guitar. Drum machines and dreamy synths. Producer and multi-instrumentalist from Turin attracted by new instruments, samples, street sounds and the relationship between music and video art. John Bringwolves was born in Biella, Italy. At the age of 6 he began to study drums and percussion with Paolo Cerlati taking part in the Tum Tribù project, which unites 40 percussionists of all ages playing in numerous squares in Italy. 6 years later he discovered the electric guitar. He began studying with Giancarlo Pini and then with his son Martino, focusing on rock, blues and funky. In 2010, together with Luca Biaggi, Matteo Lorenzi and Lorenzo Martinotti, he founded the band Rock Pop Entropia which debuted with an EP and numerous dates throughout Italy, from the Heineken Jamming Festival and then with the album La Direzione, he won the Tour Music fest in Rome and among the finalists for the 2016 X Factor selections. Thus begins a path of experimentation in which each new musical object is a new character to know and make friends with. He studies with guitarist Matteo Salvadori in Turin collaborating with DJ Feib, with the Gramophone Live project (Vlad Vraciu, machines and Riccardo Sala, tenor sax).