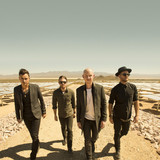 By pitching their music somewhere between the arena-friendly style of U2 and the mature pop/rock of bands like Maroon 5 and Counting Crows, the Fray rose to commercial prominence with their 2005 debut, How to Save a Life. The Denver-based band had formed three years prior, when former schoolmates Isaac Slade (vocals, piano) and Joe King (guitar, vocals) unexpectedly bumped into each other at a local music store. The pair began a series of two-man jam sessions and soon expanded their lineup with two of Slade's former bandmates, drummer Ben Wysocki and guitarist David Welsh. Slade's younger brother, Caleb, also joined the band for a time but was ultimately asked to leave; the resulting rift between the two siblings would later inspire the band's first hit single, "Over My Head (Cable Car)." After issuing the Movement EP in 2002, the quartet gained the support of Denver's KTCL radio station with a follow-up release, 2003's Reason EP. As the Fray's airplay increased alongside their local profile (Westword, a Denver alternative weekly publication, deemed them Best New Band in 2004), they began attracting attention from Epic Records. The label ultimately signed the band in December 2004, and the Fray toured alongside Weezer and Ben Folds the following summer. How to Save a Life was released in September 2005, and "Over My Head (Cable Car)" found a quick home on modern rock radio. By early 2006, it had crossed over to Top 40 chart status, peaking at number eight and whetting the public's appetite for another hit. The Fray responded by releasing the album's title track, which was heavily used in a promotional campaign for the TV series Grey's Anatomy and quickly became one of 2006's biggest singles. "How to Save a Life" was a worldwide smash, reaching the Top Ten in the U.S. (where it continued to chart for 58 consecutive weeks) and peaking at number one in Bulgaria, Ireland, Canada, and Spain. By the time the smoke had cleared, the Fray's debut had been certified double-platinum in the U.S. and was declared the best-selling digital album of all time. As How to Save a Life continued to enjoy worldwide chart success, the live album Live at the Electric Factory was released in selected independent stores in July 2006. The Fray re-released their Reason EP the following year while continuing to tour, occasionally playing new material at their high-profile shows. The band also found time to return to the recording studio, and 2009 saw the release of their self-titled sophomore effort, The Fray. The band's third studio outing was produced by Brendan O'Brien and was inspired by the group's trips to Rwanda and Germany. The resulting Scars and Stories, which was named after an unused B-side, was preceded by the single "Heartbeat" and released on February 7, 2012. At the end of the year, frontman Isaac Slade confirmed the band was starting work on its fourth record, and the Fray subsequently headed into the studio with producer Stuart Price (the Killers, Madonna, Keane). The resulting Helios, released in 2014, received mixed reviews, but introduced some new fan favorites into the Fray lexicon via the stadium-ready singles "Love Don't Die" and "Break Your Plans." Two years later saw the release of Through the Years: The Best of the Fray, a career retrospective that included a new single, "Singing Low." ~ Andrew Leahey