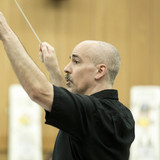 Grammy-nominated PETER BOYER is one of the most frequently performed American orchestral composers of his generation. His works have received over 500 public performances by 200 orchestras, and thousands of broadcasts by classical radio stations around the United States and abroad. He has conducted recordings of his music with three of the world’s finest orchestras: the London Symphony Orchestra, the Philharmonia Orchestra, and the London Philharmonic Orchestra. Boyer’s major work “Ellis Island: The Dream of America,” for actors and orchestra, has become one of the most-performed American orchestral works of the last 15 years, with nearly 250 performances. His recording was nominated for a Grammy Award for Best Contemporary Classical Composition. In 2018, “Ellis Island” was telecast nationally on PBS’ “Great Performances,” America’s preeminent performing arts television series. In addition to his work for the concert hall, Boyer is active in the film and television music industry. He has contributed orchestrations to more than 35 film scores from all the major movie studios, for leading Hollywood composers including James Newton Howard, Thomas Newman, Michael Giacchino, James Horner, Alan Menken, Mark Isham, and Aaron Zigman. Boyer has arranged music for the Academy Awards, and composed music for The History Channel. His music has appeared in documentary films, short films, and a variety of television programs. More information can be found at PropulsiveMusic.com.