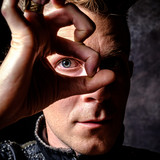 From the dawn of his career in Detroit Michigan, singer and multi-instrumentalist Dalrymple, has been viewed as both an elusive madcap and an ever-devout scholar of sound. Experimenting, innovating and redefining his music for over two decades, Dalrymple’s recorded output is a voluminous anthology consisting of eight studio albums and three musical theatre productions. Throughout his various creative disciplines, Dalrymple continually reinvents his characteristic approach to singing, song-writing and the unconventional interpretation of his signature instruments, the guitar, piano and harp.

After recording his first album, March To The Sun in 2001, Dalrymple moved to the Northern California gold-rush town of Nevada City where he founded the psych-folk ensemble, Lasher Keen. Dalrymple wrote, recorded and released six Lasher Keen albums between the years 2006 and 2015 on record labels, Pesanta Ur-folk and Crystal Cave Records. After dis-banding the group in 2016 in order to pursue a more diverse artistic direction, Dalrymple forged a more orchestrated sound with the release of his 2019 double LP, Make Believe.