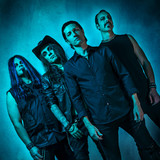 Innovation, invention, and intensity sum up Lord Zane of Society 1. In addition to being S1’s front man, Lord Zane is a published author and a renowned music video director (Zakk Wylde, John 5, Wednesday 13, DOPE, Wayne Static and many more). He achieved a world record for body suspension by suspending from giant meat hooks impaled through his back for six hours. Zane also was the first to sing and also first to play guitar while suspended during a performance. Society 1 have toured all over the world performing in front of audiences as large 80,000 people. Society 1 has finished recording 13 tracks for the new album, Black Level Six. Although the album tackles a conventional theme of recovering from heartbreak, Zane’s cutting-edge songwriting and lyrical mastery approaches the topic in the unconventional style for which Society 1 has garnered its reputation. Zane describes the new album as “very somber, but very delicate in a way – and sad and creepy all at the same time. There is absolutely a theme to Black Level Six and there’s an arc throughout. It’s about heartbreak. It’s about pain and suffering, and taking the necessary road to get oneself healthy again. And ultimately letting go of the things that caused all of this.” Black Level Six was recorded this summer, mixed by Greg Hetson

and mastered by Mike Wells. Co-produced by Patrick Burkholder, with a tentative release date for early spring, you can expect to see Society 1 touring sometime next year.