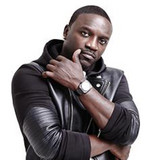 As soon as you hear Akon’s voice, you know it’s him. His shimmering, soulful voice has propelled countless hits across genres—from pop and R&B to hip hop and dance. In addition to his own chart-­‐dominating singles “Smack That” and “I Wanna Love You”, he’s made a staggering 300 guest appearances for icons including Michael Jackson, Lady Gaga, Gwen Stefani, Lil Wayne, R. Kelly, and Eminem. With over 35 million albums sold worldwide, five Grammy Award nominations, and 45 Billboard Hot 100 songs under his belt, he’s simply unstoppable. Akon holds the Guinness Book of World Records as the #1 selling artists for master ringtones in the world and became the first solo artist in history to lock down both the number one and number two spots on the Billboard Hot 100. Akon has chosen to address the immediate needs of Africans through an effort known as “Akon Lighting Africa.” This initiative will address the concern that more than two-thirds of the population of sub-Saharan Africa is without electricity, and that more than 85 percent of those living in rural areas lack access. Akon Corp., in conjunction with GIVE1 PROJECT and Solektra International, member of ADS Group (Africa Development Solutions Group), has assembled a dynamic group of strategic partners in order to create replicable, scalable and cost-effective energy solutions.