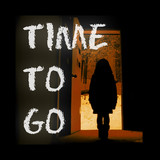 "It’s never too late to be what you should have been” The Midwich Affair triumphantly proclaim in their seminal track Thursday Brown. Enough about wonderkinds what about the late bloomers? What if a passion is so great that it lives on past that heady rush of youth? What if that passion refuses to die even when you should be cynical and jaded enough to give up the ghost? The Midwich Affair are a rallying, joyful call to all to pursue your love, your passion even if that pits you against good sense and the mainstream thinking. Vicky Travis and Andy Shaw’s mutual appreciation of sci-fi was the jump off point for The Midwich Affair taking their name, in part, from the fictional sleepy hamlet in John Wyndham’s classic to hint at them being not all they appeared in their cover band guise and dreams of releasing their own music. The Midwich hatched their plans whilst honing their live skills, delivering electrifying performances of covers by their musical heroes. With Mike Hart on guitar and Andy Jackson on drums they insisted on having a rollicking good time playing pubs and clubs around the Midlands. It’s not been the direct route, but finally new wave, rock, pop and unbridled enthusiasm collide, and the dream becomes reality, the dream is Hard - the debut single from The Midwich Affair.