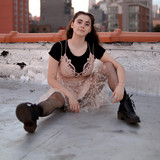 Isa Bruder is a Brazilian & American singer-songwriter. She can be found playing gigs around New York City at venues such as The Well (Brooklyn), Jack Vartanian jewelry store (SoHo) & even NYU’s Skirball Center. Featured on platforms such as Girl Gang NYC, Swedish blog Popmuzik and Brazilian teen magazine Capricho (4.2M Instagram followers), she has earned a following of 6.33K subscribers on YouTube and over 3K followers on Instagram. Her debut single, Close to Her, was released on July 30th, 2020 and is available now on all streaming platforms, alongside a music video available on YouTube.