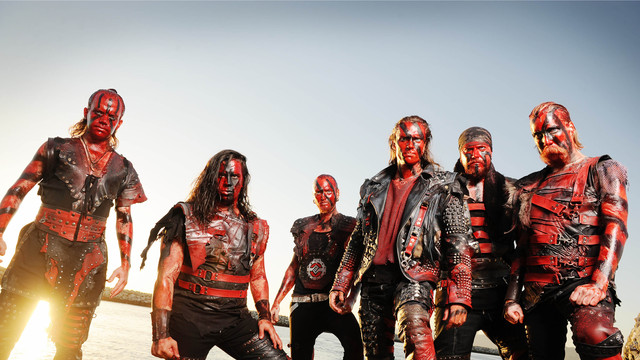 Named for a warrior god in Finnish mythology, Turisas are a heavy metal band whose music is an ambitious blend of symphonic metal, power metal, progressive rock, and Finnish folk music. Turisas were formed in Hämeenlinna, a rural community in southern Finland, by vocalist Warlord Nygård and guitarist/bassist Jussi Wickström in 1997. Eager to perform their songs that blended pagan folklore with bloody tales of warfare, Nygård and Wickström recruited three likeminded musicians, percussionist Tude Lehtonen, keyboardist Antti Ventola, and guitarist Georg Laakso, but the epic-scale sound they sought proved difficult to capture on tape, and Turisas' first attempt at recording an album, 1998's Taiston Tie (aka "The Battle Path"), never saw release due to the group's dissatisfaction with the results. In 2000, a demo CD, The Heart of Turisas, was distributed to fans, the press, and industry professionals, and coupled with the group's storming live show, word spread about the unusual band and Century Media signed the group to a recording contract in 2003. Turisas' first proper album, Battle Metal, recorded at studios in France and Finland, was released in mid-2004, with the band supporting the album with appearances at a number of major European metal festivals. In the fall of 2005, Laakso was involved in a severe auto accident that caused major injuries to his spinal cord, forcing him to leave the band. Wickström took over all guitar duties for the recording of Turisas' next album, 2007's The Varangian Way, while Hannes Horma (bass), Olli Vänskä (violin), Janne Mäkinen (accordion), and Antti Laurila (accordion), four musicians who had helped fill out the group's sound during live concerts, appeared on the disc as full-fledged bandmembers for the first time. A few months before The Varangian Way was to be released in the spring of 2007, Antti Ventola announced he had left Turisas in a post on the group's online forum. ~ Mark Deming, Rovi