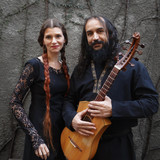 Duo Olam Ein Sof was formed in 2001, by the musicians Marcelo Miranda and Fernanda Ferretti. Their songs are inspired by themes as: medieval, renascentist, folk, various mythologies, ethereal universe, thus, they do a distinctive authorial work. Seeking for a deep name, without a meaning label, and has a representation too an infinite union, Olam Ein Sof was choosen. A Cabalistic name with complex signification but it can translated as Infinite World, this is how they think about art: without frontiers and transcendental. They propose on their concert a show with magic and fantasy, bringing back the values from our ancestors and a reconnection with the universe. They toured through many Brazilian States and also in Colombia (2010/2017), Chile (2012), Portugal (2014/2015/2018/2019),