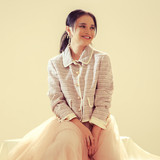 As Indonesian Diva, Rossa has produced numerous hit songs and gained the Multi-Platinum Award for her albums. She has sold over 10 Million Albums until 2016 and has become the Best-Selling Indonesian Artist of All Time. She received much love not only from Indonesia but also across Southeast Asia and up to Japan. Rossa marked her accomplishment with over 111 total awards, 120 radio hits, 150 title soundtrack, expensive regional solo concert, and tour. She's also trusted with the role of singing the official theme song of Ministry of Tourism and Creative of Economy Republic Indonesia "Pesona Indonesia / Wonderful Indonesia", Asian Games 2018 "Bright As The Sun" and Ministry of Environment & Forest Republic of Indonesia "Rimba Raya”. Early 2017, Rossa launched her latest album, "New Chapter," and collaborated with international musicians in this project. This album was awarded 4x Platinum on 5th October 2017. She has also received the "Planet Muzik Special Award / Legend Award" from Anugerah Planet Muzik in Singapore on 28th October 2018. In February 2019, Rossa signed a record deal with SM Entertainment. International label from South Korea which manages Asia superstars such as SUPER JUNIOR, EXO, NCT, Red Velvet, BoA, BAEKHYUN, TAEYEON, SuperM, aespa, and many others. Besides, she's is the only singer in Indonesia with the title of nobility from the Surakarta Kingdom "Kanjeng Mas Ayu Sri Rossa Swarakaloka" and Pahang Kingdom, Malaysia "Dato' Sri".