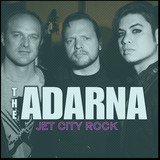 Taking their name from a mythical phoenix-like songbird in Filipino folklore, The Adarna [pronounced uh-darn-uh] are the first band to ever coin their genre as “Jet City Rock,” due to their proximity to Seattle's Boeing Field.

Known for their relentless energy and aggressive tour schedules, this international touring artist is armed with a 3rd album titled "Road to Resonance."