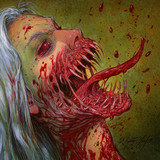 Violence Unimagined. The title tells you everything you need to know about Cannibal Corpse's fifteenth hellish opus. Comprised of eleven tracks, it is state of the art death metal played with passion and breathless precision, making for another flawless addition to what is inarguably one of the premier catalogues the genre has thrown up. While they continue to do what they do with aplomb, the one substantial change to Cannibal Corpse in 2020 is the addition of guitarist Erik Rutan to their ranks, joining Webster, founding drummer Paul Mazurkiewicz, guitarist Rob Barrett and vocalist George "Corpsegrinder" Fisher. Known for his roles in Morbid Angel, Ripping Corpse and most notably fronting the mighty Hate Eternal, Rutan has long established himself as one of the most dynamic forces in contemporary death metal. Simultaneously, he has built up a reputation as one of the most in demand producers in metal, having previously produced four Cannibal Corpse albums, alongside the likes of Goatwhore, Soilent Green and Belphegor. Filling in live on guitar since 2019, in 2020 he became a full member, contributing to the writing process.

And it would not be a Cannibal Corpse album without striking artwork from Vince Locke, and Violence Unimagined is no different - this time, the cover featuring a mother eating her own baby, though Webster concedes that for censorship reasons, they have had Locke do a complimentary piece that will be more widely released.