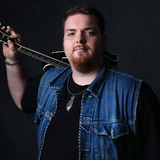 From a childhood with stories of living in a barn, Jake Clayton found a passion for music that eventually took him out of rural Missouri and placed him in Nashville, TN playing for top names in the biz. After 13 years Jake has a huge list of accolades including performances with icons Brad Paisley & Keith Urban, shows at venues like The Grand Ole Opry and Madison Square Garden, appearances on Jimmy Fallon, Ellen, and The CMT Awards, and credits on #1 songs & albums. Jake Clayton has also fueled a passion for writing, recording, and touring as an artist. In the past decade Jake has released multiple albums, eps, and singles. He charted a song on the Country Breakout Charts and had a video in rotation on multiple tv shows. Jake has also opened shows for hitmakers Jon Pardi, Granger Smith, Kane Brown, David Allan Coe, and others. There’s still one unique factor that sets Jake Clayton apart. He has the rare ability to play over 20 Instruments very well. In short, Jake comes to the table with enough skills alone to equal a band of top musicians. On his own recordings, he writes or co-writes all songs, and then performs nearly every Instrument! Bass, guitars, dobro, fiddle, cello, mandolin, banjo, pedal steel, percussion, the list goes on. But not only is Jake the band, he glues it all together with a powerful voice that carries the lead vocals and the majority of vocal harmonies as well. Combine all these elements and you have one of the most unique Artists in the business.