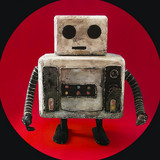 Through film, art, story books and music the Berlin-based rock band Substereo immerse you in their journey. Be it in a world of pirates in search of a mysterious treasure, or in the company of a lonely little robot trying to save its dying world, the four-piece band blurs the line between reality and fiction. After numerous concerts and performances in Scandinavia and Europe, the band followed the success of the first album by releasing the self-produced concept album “Nowhereland” in 2016, which was based on and accompanied by a novelette written and illustrated by frontman Chris Angel Walker. The band experienced a kind of re-birth in 2018 with a renewed lineup in Berlin, and got ready for the next chapter of its story. With influences such as Pink Floyd, The Foo Fighters and John Mayer, Chris Angel Walker, Robin Schulte, Baptiste Watiez and Nic Edinger pulled together their strengths and created yet another project, which doesn’t simply focus on the individual songs, but incorporates a holistic approach with art, story-telling, and a five-part stop-motion short film, which will transport you to another world! In 2020, after countless hours of hard work, they will unveil the “Renaissance Series”, a project in which they have poured their hearts and souls into. So strap yourself in and keep your seat in the upright position ..you are about to go on an adventure!.