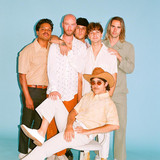 Just as the band’s name reflects an in-between state, HALFNOISE—the celebrated solo project of Zac Farro—lives between genres, fusing elements of synth pop and surf rock in strikingly original ways. With his new record, Natural Disguise, Zac pushes himself into even more exciting territory. Natural Disguise started with a new year’s resolution. Zac wanted to reveal more of himself to the world. He started listening to classic rock of the ‘60s and ‘70s, and was moved by those bands’ unvarnished authenticity. After a year spent writing, recording, and attempting to live in a more honest way, the album came into focus. It’s Zac as we’ve never seen him before. “Natural Disguise,” the standout title track, is a free-wheeling meditation on the masks we all wear. The rest of the tracks are about what happens when we pull those away—and the joy and freedom we can find in their place. “It was like a lightning bolt hit me,” Zac says of making Natural Disguise. “I seriously feel this record is like nothing I’ve done before. It feels like step one, in the form of an asteroid.” The album is undoubtedly a creative high-point for him. It marks the first HALFNOISE record he produced entirely on his own—a result of the newfound confidence he found from his year of following his artistic instincts and living dangerously free. The production, which weaves together dreamy psych rock and Afrobeat energy, reveals a new side of HALFNOISE.