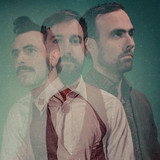 St. Beaufort is a multinational roots-americana trio based out of Berlin. Founded in 2014 and drawn together by a passion for acoustic music and storytelling, their energetic performances have captured the hearts of audiences all the way from the Scottish Highlands down to Sicily. Their sound builds on a foundation of banjo, guitar and upright bass, while sharing lead vocals and backing harmonies. They craft songs with a driving energy that transports listeners to wilder places and simpler times. St. Beaufort consists of Henric Hungerhoff, Tomás Peralta, and Joe Jakubczyk, hailing respectively from Germany, Chile, and the USA. Following their self-titled debut in 2015, St. Beaufort’s second studio album was released on May 24th, 2018. The trio recorded their third studio album in spring 2020. A release date has not yet been announced.