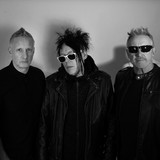 Calling All Astronauts are a London based Industrial Metal supergroup, featuring members of Goth stalwarts The Marionettes, much loved Pop -Punkers Caffeine and seminal Rap Metalers US:UK, often compared to Ministry, Rammstein, KMFDM but their sound doesn’t stop there as they introduce, Goth, Drum and Bass, EDM, Darkwave and Punk, into the mix. Their latest singles have been mixed by double Grammy winner Alan Branch (Nine Inch Nails, Depeche Mode, U2) In their previous incarnations they have toured the world with The Offspring, The Cult, Sisters Of Mercy, Blink 182, AFI, Less Than Jake, The Dickies and many more, . So far they have released 22 singles and 3 albums, their 3rd album #Resist was released on June 5th 2020 to fantastic critical acclaim They have have had 5 #1’s on Hype Machine’s Twitter Music Chart as well as featuring in many radio charts worldwide, receiving play from BBC 6 Music, Radio X, Total Rock to name but a few. They have made festival appearances at the likes Kendal Calling, Guilfest, Bamboozle, Beautiful Days, Treffen Gothik and more.