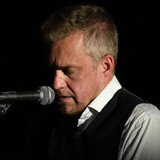 Martin, born 1967, was brought up in the small town of Älmhult, Sweden (home of IKEA), where both parents worked as general practitioners. In his mid-teens, music became an increasingly dominant part of his life. Despite, he claims, some very bad odds:

"Demis Roussos, Scott Joplin and obscure ’70s compilation records”. That’s the kind of music I grew up with." Luckily, his older brother was kind enough to borrow him both his guitar and record collection – the spark that would ignite his lifetime devotion for music and songwriting. Although ’60s soul, Country and American root music always have been his main influences, Martin is a “good music man”. If it’s good, it’s good, no matter genre. Martin is a Do-It-Yourself artist by heart. All his records to this date have been realized and released without any support from a record company. And the hard work has paid off: he’s been playing live in national TV several times and gained some really good reviews from Swedish media. The recent years, Martin has been focusing on songwriting, mainly through studies and collaborating with songwriters from the US. A path he finds extremely rewarding and inspiring.