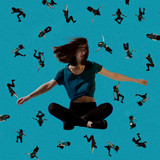 Monikaze - electronic music solo project by the versatile composer and artist Monika Zenkeviciute from Lithuania. After gaining recognition as a top 10 in the International Rostrum of Composers 2019 with her chamber piece 'Pocket' Monika pursued her career as electronic music producer and artist, releasing her debut album "Chicken Wings", with her live show supporting such bands as Algiers, First Hate, Dopplereffekt, while making remixes for other artists like Tom Sanders, Odagled, Artfcl and more. Monikaze music could be described as Avant-pop, combining her raw and manipulated vocals with different electronic and acoustic textures, which are often inspired by a wide range of genres such as IDM, electronica, jazz or instrumental works by post-minimalist composers.