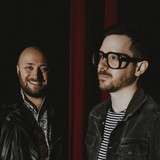 Despite their Canadian heritage, nerd rockers Double Experience are ironically unapologetic in their commitment to an underdog music category and it's tropes. By taking influence from Weezer, Muse, and Coheed and Cambria, the band bounce between sounds in a quest to compose music as diverse as an arcade gallery. The genre-pinballing is unified with their quirky lyrical subject matter that ranges from artificial intelligence, tabletop gaming, comic books, and more. In doing so, Double Experience have bonded with a passionate global fan-base with their undeniable live prowess, all while maintaining a strong DIY-ethic that saw them perform nearly 1000 concerts across 18 countries, opening for bands such as Danko JonesMonster Truck and MC Lars. By day, mild-mannered band members Ian Nichols (vocals, bass) and Brock Tinsley (guitar) deliver band-oriented workshops and panels at conferences, conventions and festivals (IndieWeek, MAGFest, Ottawa ComicCon), teaching up-and-coming creatives how to take control of their own destiny in a similar way as the duo’s musical alter-ego. In 2014, they co-wrote and recorded music with Jayson Dezuzio (Imagine Dragons) and in 2016, their Destiny-themed anthem “The Glimmer Shot” caught the attention of the game's developers at Bungie. You have been slain by the band biography... Continue?