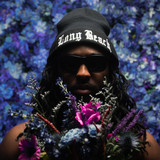 Micah Bournes is an acclaimed poet, rapper & musician from Long Beach, representing the paradox and difficult realities of being Black in America. Raised on Gospel and Gangsta Rap, his work touches on themes of culture, justice, and faith. "As a Black boy growing up in Long Beach, I was inspired by artists like Snoop Dogg, Dr. Dre, Nate Dogg, Warren G, DJ Quik, Ice Cube and more. It was amazing to see young Black men from the hood using their creativity to lift themselves out of poverty and influence the entire globe". September 4th 2021 sees the release of his highly-anticipated new album: ‘DETOX’ which tackles the role of masculinity within Black male culture. From the celebration of healthy Black masculinity to addressing how toxic masculinity in Black men is often expressed as a misguided response to a nation poisoned by white supremacy. 'DETOX' is dedicated to teenage Micah, and "all Black boys trying to figure out how to thrive in a nation designed for us to fail". As well as pursuing his first love of Hip Hop, Micah has had a busy decade partnering with global non-profit organizations and performing at concerts, conferences and universities all over the globe; from India and New Zealand to Rwanda and Hong Kong. He is also the author of a poetry collection titled "Here Comes This Dreamer" and has released albums in various genres including: folk, blues and spoken word. To keep in the loop of Micah Bournes' music, be sure to follow him on Spotify.