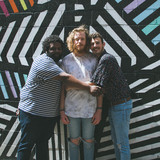 Fabricated Freedom began as the solo project of Cincinnati musician and songwriter Joey Drees (PADDYSOO) in early 2017 with the release of The Messenger. Combining elements of rock, electronic, and dance, “The Messenger” gained popularity in online music communities. After spending the rest of the year promoting the album online, solo artists Josh Zak (New Tycoon) and Cailin Pitt were added to the mix. Since then, the band has been working on writing new music while also gaining a live presence in Greater Cincinnati. Now a three person creative force, Fabricated Freedom uses their music not only to create their own freedom, but also to help their fans find what sets them free.